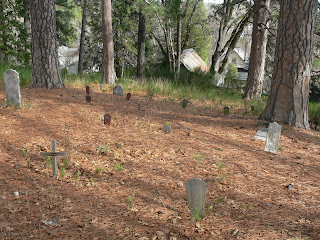 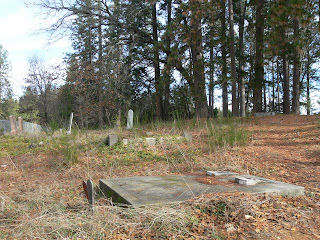 I think most of the time we picture a forgotten cemetery in our minds as a desolate place with broken headstones and no one for miles around,not a visitor for years. And there are a lot of them like that.Sometimes when I visit the new "improved" mega sized burial grounds with all the flat markers,most not having had a visitor in ages they feel as "abandoned"as any thing a century or more old.A friend and I had this conversation about the difference in the feel of a "living cemetery" versus a abandoned or "dead"one recently while taking these pictures.It might sound funny talking about a" living cemetery" but it's true.To me a living cemetery is one that is truly part of the community it is in,no matter the age or even the degree of upkeep.I have seen cemetery's in poor community's that won't pass the immaculate groomed lawn test but where graves were tended,people came to visit the dead or even just walk their dogs and jog.The dead are accepted neighbors. The Pioneer cemetery in Nevada City CA. is pretty much a abandoned cemetery.Even though it sits within a neighborhood and above a Catholic cemetery that is very much alive.There is one or two more recent headstones within this cemetery that seem oddly out of place.All others are quite old and the vast majority of graves here are unmarked.Depressions in the soil covered with a thick and treacherous to the footing layer of pine needles and leaves.Some are marked with wooden slates or crosses put there no doubt by the historical society at some point to mark a spot.But many have not even that.There are a few quite attractive markers left here and no signs of recent vandalism unless you counted a stray beer can left no doubt by a local high school kid.I have it on good authority that this is a favored place to get scared by local teenagers.But the feeling here is of emptiness.You get the feeling no one leaves flowers,few find a long lost gggrandparent.There is no expectation in the air.It is silent. Many of these burials were from the Gold Rush era.People came from all over the world to try their hand in the gold fields.Usually alone and often knowing full well they would never see home or family members again.For those that did have family local when they died, most would have moved on in the westward journey,to places more hospitable and with more opportunity than tiny mountain towns that were mostly forgotten after the gold played out. It's dark under the pine trees making a challenge to photograph,and I would not be surprised if this was one of those cemetery's that did not really end at the fence line but had burials under housing and roads.Time would have erased much.
There is one famous resident here.At least I think he's here,there is some dispute if he was moved here from San Francisco. Arron Augustus Sargent was a California senator,politician, lawyer and diplomat.He was called "the senator for the Southern Pacific Railroad'.And if you know anything about the history of California you know what a powerful man that made him.His grave bears a plaque explaining how he wound up back in Nevada City. 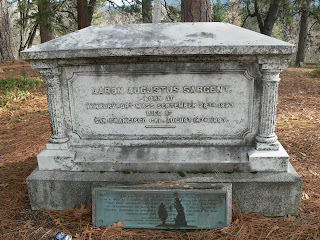 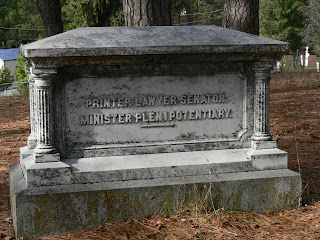 I have shown a picture of little Wilson Burnett Heads grave in another post.The ironwork around this headstone is truly beautiful.
. 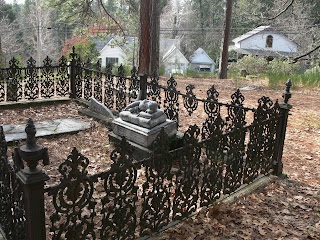 Neighborhoods all have different characteristics to them.Some rich,some poor,old and new, ethnic and ordinary.Some pulse with life,youth and change.Some grow old with grace.Others become battle grounds filled with violence and neglect.And some disappear,forgotten by most, at best a line in a local history book.
Why should it be that our cities of the dead would have no differences?They say that death is the great equalizer,but even our final resting places reflect our lives in some way and I think the still living can feel that.
Posted by dustbunny8 at 2:21 PM

Great pictures and a wonderful article! We have so many lost cemeteries in the south that people seem to be finding all the time!

This is a great truth you have written and a bit sad too. Well said.
Thanks,
Frances